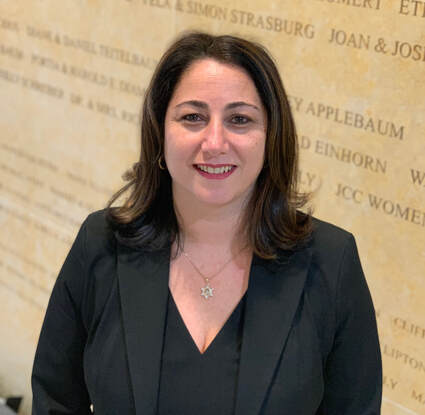 Orit Lender, CEO of the Joan & Alan Bernikow JCC of Staten Island, is a community-minded leader with more than 20 years of experience in outreach, community building, and philanthropy.
​
Prior to her time at the JCC, Orit served as the Youth Coordinator at Seaman’s Society for Children and Families, where she facilitated youth groups throughout Staten Island. She built on this background in her first role at the JCC as the Youth Empowerment Director. This position gave her the opportunity to make a positive difference in young people’s lives through programs like camp and an anti-tobacco campaign. After taking on the role of Program Director in 2009, Orit’s work brought her out into the community to work with Staten Island’s senior population. Working closely with community leaders and government agencies, she developed and supervised all of the JCC’s senior centers including the Innovative Senior Center. In 2015, Orit was appointed Assistant Executive Director, and as she expanded her portfolio, she was named Deputy Executive Director. In these roles, her vision and leadership touched all aspects of the JCC’s work across Staten Island. During this time, she also completed the Duke University Executive Leadership for Non-Profit Certificate program. In 2020, Orit was selected to be the JCC’s next Chief Executive Officer. She has the distinction of being the agency’s first female CEO.

Across her work, Orit fosters a sense of community driven by the Jewish principle of tikkun olam, or repairing the world. Her leadership fosters a spirit of teamwork within the JCC, but also helps to bring the JCC out to the larger Staten Island, New York, and Jewish communities. Orit cultivates meaningful relationships between the JCC and religious and lay leaders, government agencies, and other community organizations. She serves as a member of many of these organizations, including UJA-Federation of NY, JCC Association, the Staten Island Not for Profit Association (SINFPA), Staten Island Chamber of Commerce, the Staten Island Economic Development Corporation (SIEDC) Business Council, the Council of Jewish Organizations (COJO), and the Wagner College Chai Society—to name just a few. These relationships, stewarded by Orit’s leadership skills, have allowed the JCC and its partners to serve more Staten Islanders of all ages and backgrounds and work towards building a better, more caring community.

The daughter of two Israeli parents, Orit lived in Israel on Kibbutz Urim before moving to Staten Island as a child. She has been married to her husband Ed, who she met in Israel, for nearly 20 years. The Lenders have two children, David and Ethan, who are active in JCC youth and sports programs
Donate
Whistleblower Policy
Title VI Notice to the Public
Staff Resources Login
© 2022 JCC of Staten Island